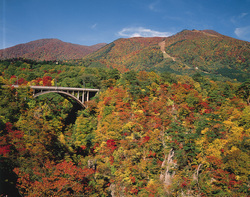 Osaki (大崎市) is a sprawling region in the Northwest corner of Miyagi, nestled against the mountains of Yamagata.  It is definitely a rural area and there are many locations with natural beauty to be found.  But the rail coverage in the area is sparse and trains run infrequently so Osaki ALTs spend a lot of time in their cars.  Traditionally, ALTs gathered in the central city of Furukawa, but with the city changing from JET to private ALTs it has become difficult to find places to spend the night.  (Don’t forget: driving after even one beer is verboten in Japan!)
FURUKAWA 古川
A post-modern backwoods town that tore down its trees in favour of cement low rises and the right to be called a city.  Some may even call it ugly.  But to those of us who know the ‘Fu, it is a place of restaurants and bars, of Russian hostesses and English conversation schools, of oversized grocery stores and overstuffed electronics shops, and a gateway to Sendai and Tokyo via the Shinkansen.  In short this old river city is not so bad.
—Anon

Central-East Furukawa:  Large JUSCO (grocery store, clothing stores, home supplies).  On the other side of the railroad tracks are a YaMaYa Foreign Foods and Liquor Store, a quality Bakery and a Yoku Benimaru Grocery Store

Bars and Restaurants Morning Cafe and Megatone Karaoke: The basic ALT night out in the city.  Cheap burger place and cheaper karaoke, both open all night.  The quality of entertainment goes up the later the night gets.  Or is it the less you have in your sake bottle…Megatone Karaoke is the one huge Karaoke place in the Fu.  It’s on the west side of the shinkansen tracks, two blocks north of the station.  It’s pink, neon and bright.  Pick up the phone and order a drink, or two, or three…

Gyu-Kaku: Korean style meat on a grill.  A chain restaurant with an English menu and a friendly staff that’s near Okie on the east side of the shinkansen.

NAM:  The gaijin bar in the Fu. It’s decorated like a Hollywood Western, named after an unpopular American war, but calls itself Irish because it sells Guinness.  No throwing darts at the dartboard.  Walk straight out of the station, walk two blocks straight, turn right. Kinda pricey but your chances of running into an English speaker are greater here.  Katakana menu.

Getting Here and Away By Bike:  Furukawa isn’t close enough to most people to bike too, but if you have an extra bike, leave it at Furukawa station, and use it when you come into town.  It makes everything a lot easier to access.

By Bus:  There are buses that run to and from Sendai.  You can buy a one-way ticket for 1230yen or a four-ticket value pack for 3000yen.    No need to book ahead, just pay the driver.

By Car:  Take Route 4 north from Sendai or South from up North.  Turn East at the MacDonald’s to reach the city center.  Other roads that lead to and pass through Furukawa: the 47 runs between Naruko and Wakuya crossing through Furukawa; the 347 runs from Nakaniida to Furukawa.  Another thing, don’t ever pay for parking.  Just be creative, create a space.

By Train:  The shinkansen takes 14 minutes and costs about 1500 yen one way to Sendai.  There are a lot of slower, cheaper trains to Sendai as well but they usually have long transfer waits in Kogota.

Date Masamune, famed warlord of Sendai, had his samurai training school here.   It is an interesting diversion for a few hours.   There is a physical science museum based on the five senses.  Downtown you can find a bar called Mama-san’s, run by a Mama-san who loves foreigners and has expensive karaoke.  Every autumn, Iwadeyama hosts a hot air balloon festival.

Located on the Tohoku train line it has good access to both Matsushima and Sendai.  The gym, a short distance behind the train station, has a minimal fee with free membership. There are many decent restaurants and izakayas and one small restaurant offering “the best eel North of Fukushima”.  There is also a new pizza restaurant. Yay pizza!

This town is an amalgamation of three towns, Onoda (小野田), Miyazaki (宮崎), and Nakaniida (中新田).   Onoda and Miyazaki are beautiful, with rolling hills and valleys filled with rice fields, but not much else.   Nakaniida has the shops, including Lucas video, a Yoku Benimaru, a coffee and spaghetti restaurant called Liverte, a few izakayas and a hair salon where the hairdresser speaks English.  Mt. Yakurai, situated in Onoda, casts its small shadow over Kami and makes for a good hour long hike.  There are also restaurants, a nice hotel, (rentable) cabins, an onsen, and a water park at the base of Mt. Yakurai.  When not swimming, you can practice karate in the evening at Nakaniida High School.  Kami town is one of the few places in Miyagi to offer 4th and 5th year JET positions in their elementary schools.

A popular place to spend an hour or two waiting for a train change when going from Furukawa to Sendai. You can kill the time eating curry udon in the restaurant across the street.  Go a little farther and you can find a cozy little izakaya.

This town has fields filled with sunflowers during the summer.  During the other three seasons the action is at the Cowboy Complex shopping strip mall on route 4 (complete with bowling, skating, karaoke, videos and batting cages).  Fill your belly at Global Viking, an all you can eat restaurant featuring yaki-niku, ice cream and cotton candy.

Home to the mischievous river god, Kappa (who will remove and eat your liver by reaching up your anus if you’re not careful).  The Rice Field is an all-natural restaurant on the 457 that has great live music on Friday nights.  The ‘Zen’ course is vegetarian.  For the meat-eaters, follow the little green Kappas eating green steaks to find the family style steak restaurant which sits on the small hill overlooking the town.

Tourist hotspot of northern Miyagi.   Come here for great onsens, outdoor sports and a wide selection of kokeshi dolls.  With all those mountains there are some great hiking opportunities.  The Naruko Gorge is a beautiful walk by yourself or with friends.  Ten minutes from the bridge you can hike up to the museum on a small path.  In Onikobe, you can walk through “Hell” (a hot sulfur spring) and rest at the nearby geyser and outdoor public onsen.  There is also a small ski resort at Onikoube that is great for an easy day of skiing and boarding.  To get to Naruko, it is easiest to drive, but there are buses and trains from Sendai.  If you come in the fall, when the leaves are changing color, be prepared for traffic.

There is a nice hill to view cherry blossoms in this town plus a public sports facility where you can reserve a “football” field for an afternoon or two.  Tajiri is also home to the local park golf course.  Park golf is a cross between golf and croquet and a round of fun with the local 80-year olds will cost you less than 1000yen.  Tajiri is one stop north of Kogota on the Touhoku Honsen train line.

It’s only 5 minutes south of Wakuya and although it doesn’t have much to offer, it does however have a great swimming pool.  8000yen for a 3 month pass.  Unfortunately, Nango doesn’t have a train line, so you will need to drive or hitch-hike (not officially endorsed by MAJET).

Wakuya is a peaceful town about a 25 minute drive from Furukawa with a population of 19,000 plus 1 JET.  It has a samurai castle called Wakuya Castle (which is famous for its cherry blossom festival in April). There is a gold museum (天平ローマン館), as gold was discovered here during the Heian Period. The gold was used to cover the Daibutsu of Nara, and for 600 yen, you can pan for your own gold! There's also an old temple on top of a mountain called Konpoudera (こんぽう寺).There's a golf course, an awesome karaoke place, and a couple of Western-food restaurants.  Luckily for you, Wakuya is train-accessible.