Shiogama is a port town in Miyagi located between Sendai and Matsushima. The city derives its name ("salt furnace" or "salt cauldron") from an ancient method to harvest salt by boiling seawater in large kettles. The ritual is still performed every July at Shiogama Shrine, the oldest Shinto shrine in Tohoku. The city supports a large fishing industry, and a significant portion of Japan's tuna and swordfish catch is processed along Shiogama's waterfronts. ​Not surprisingly, Shiogama is famous for its local seafood, especially its sushi, and boasts the highest number of sushi restaurants per capita in Japan.

The main hub of the city is around Hon-Shiogama Station. There are many restaurants, bars, coffee shops, Aeon Mall, and Marine Gate. Marine Gate has a couple of restaurants and souvenir shops. At Marine Gate you can by ferry tickets to Shiogama's Urato Islands and Matsushima.
​
There are 5 islands that you can visit and prices vary according to the distance. Katsurashima is the first stop on the ferry. There is a post office, a nori factory, Katsurashima beach where you can swim. The next stop is Nonoshima. There you can find the General Development Center, Urato ES and JHS, a Christian Buddha statue in the Kumano Shrine, and a curious group of caves. The third island is Ishihama, and there isn't much there except fisherman and a view of the other islands. The largest of the Urato Islands is Sabusawajima. It is the birthplace of Tsudayu and Sahei, who were the first Japanese to travel around the world. During the Edo period, Sabusawajima had thrived as the Date Clan's port. There are objects that show former prosperity today such as the stone compass of the twelve animals of the Chinese zodiac, statues of bound Jizo in Hiyoriyama Mountain, and the monument for the very first Western-style warship "Kaiseimaru" built by the Date Clan. The last island on the itinerary is Hojima Island. This island's main industry is fisheries with raw oyster and fry oyster cultures.​​ 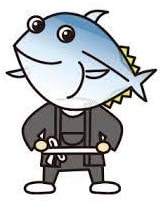 Magusuke is officially Shiagama's PR Character, BUT he is just one of ELEVEN characters Shiogama has.
- ACCEPTING RECCOMENDATIONS-
Let us know if there is something you want us to feature here by emailing us at miyagi@ajet.net!
<
>