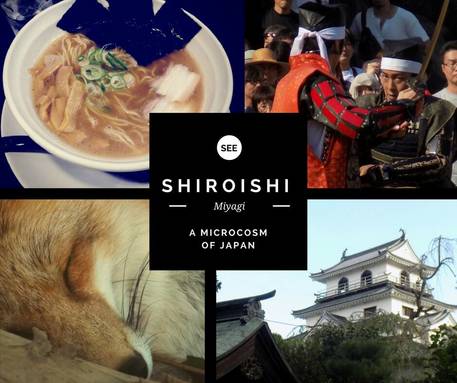 Kara Fimian (Shiroishi ALT)
​There is nothing squee-worthy than a fuzzy pompom of a fox, nor is there anything more surreal than watching local office workers don Samurai armor and march into anime-styled battle, business spectacles and all. And the definition of euphoria that is the local Tonkotsu Shoyu Ramen dish is the perfect end to any daytrip.  From food-gasmic ramen to squishy foxes, Shiroishi, Miyagi is no doubt the best microcosm of Japan that you cannot find anywhere else.
Shiroishi foxes look exactly the way normal foxes do, but these Shiroishi breeds score at a dangerous level of adorableness on The Cuteness-Geiger Counter when you consider the fact that you can actually pick them up.
Yes, that’s right. While illegal to approach and domesticate for non-educational reasons in other countries, Shiroishi is the Wild West of kawaii. The Zao Fox Village`s (Zao Kitsune Mura) rural forest mountaintop setting can only be described as Outdoorsy Pompom Heaven. Many a Japanese lifestyle blogger has reviewed this topic but few know it to be found in Miyagi`s city of Shiroishi.
Inside the pearly gates of fluffy heaven, signs do warn visitors of potential bites from the floofs. In others` experience however, some people have found the foxes along the winding path of a village are too busy sleeping inside tiny houses to work up the energy to bite. Besides sleeping in Russian-hat formation, foxes are busy eating like pompoms, playing with other pompoms, and begging for food with sad eyes. Perfect for professional and amateur photography enthusiasts. Candid close-ups you wouldn’t normally get are the best free souvenirs you can get in Japan. Shots of snuggly-squishies will have you swapping out maxed memory cards one after another. 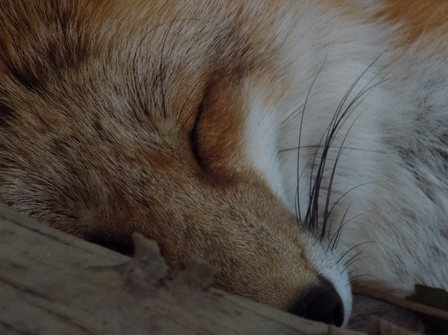 [You bring the snuggles, I bring the cuddles.]
​A separate area (roped off for its absolute awesomeness) has helpers dressing you in fabulous neon-green raincoats and then giving you a sleepy little poof-ball. You have exactly four minutes to squee in borderline euphoric delight as you hold a soft fox. Going home is a tragedy, but the only advice available for that treacherous return is patience. Planning for next time and how to get there is always a good idea. Tuesday buses or car rentals from Shiroishi Zao Shinkansen Station are available, as are taxis (although a 40-minute taxi is something you should share with friends).
If the previous section of this article hasn’t already created the urge to open another Google Maps tab beside this article then let us just inform our reader about the annual battle this town has. Not to fret my Battle Royale fans, this is a fight to the death our reader can watch from the comfort of their own foldable beach chair.
If trippy techno club music at ten in the morning and ninjas rappelling off of castle roofs is your thing, then please come on the first Saturday of October to see the Oni-Kojuro Festival. The authentic Siege of Osaka reenactment is one of those few live performances where the words `artistic liberty` is only comparable to a video game.
The castle is only a fifteen/twenty-minute walk from the Shiroishi JR station or a fifteen-minute taxi from the Zao Shinkansen Station. Once you get there, the reconstructed white castle is ringed by a huge mass of food stalls of peach and tea) and gorgeous samurai waiting to take a picture with you. Some might lend their (unsharpened) swords to you for the pictures even. The battle is full of ancient Japanese dialogue you need an N1 level to understand, swords fling like club night sticks, and a bromance to end all bromances tears through the storyline. The intermission includes archery, people backflipping their way across the battlefield (an authentic reenactment to be sure), and stressed out princesses. Not to mention ninjas. Whatever ridiculous thing you are imaging a ninja doing right now that is exactly what you’ll miss seeing if you skip this year`s Oni Kojuro Festival. The website JapanTravel.com quotes (we kid you not): "Though unlikely to trouble this year's Oscars, the performances are charmingly OTT… ". 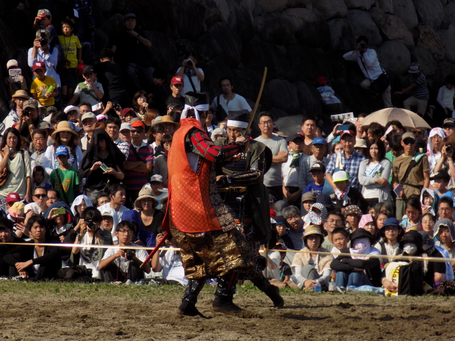 [I`ve seen the portraits of the original fighters. Girl, I too would opt to Swipe Left if my parents arranged that marriage.]
After an exciting day of snuggling good little kitsune and hanging on the edge of your picnic blanket in horror as zip-lining ninjas hold on for dear life, the average traveler might need some serious R&R. And what better place to sit and relax at a famous local ramen hotspot? Unjarage of Shiroishi is famous among southern Miyagi foreigners as the best place for comfort ramen. Even the Japanese teachers who work with foreigners are vaguely aware of a `Super Tuesday` night existing among their English-speaking coworkers.
It is actually the only place in town, if not the surrounding area that offers its taste-bud exploding Tonkotsu Shoyu Ramen (or soy sauce pork cutlet bowl). Foodie travel bloggers have been known to send the letters of their laptop keyboards ricocheting off walls in the rush to share Unjarage`s deliciousness to the world. Before opening in 2010, the only way to taste this food was to pack into sardine squished Sendai-bound trains for an hour. In a country where many of Japan`s workers plug in ten-hour workdays, that kind of Mordor-length journey just isn’t feasible. Its four-minute walk from the bullet train station can even be cut down to two, but only if one sprints like Bolt.
Now, locals (giddily) walk up the wooden steps under a wooden Unjarage sign and clean their piggy banks of ten yens into a vestibule ticket machine. The gyoza set (餃子セット) and Tonkotsu Shoyu Ramen (豚骨醤油ラーメン) have the most pressed plastic buttons on the machine. 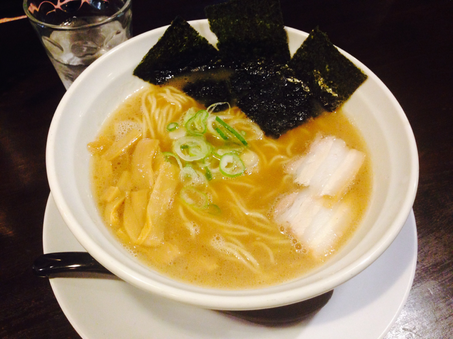 ​[What it would look like if your soulmate arrived in Ramen Form.]
​pockets slurping massive bowls of ramen. Families tucked away in comfy booths feed their little ones plump gyoza and foreigners test their language skills by deciphering the `variety` show subjects on the overhead televisions. Which, as they are developed in Japan, are never ordinary and always morbidly fascinating. (Did that woman really give birth to a lizard? Which pop star would be likely to survive on a tropical island?)
The shop keeps its regular customers with an atmosphere that is best described as `Rustic Japanese Post-Workday Chill` and with food prepared with both the care and secrecy of a Krabby Patty. The broth of their ramen is slow-cooked for a full twenty-four hours in a stew of boneless meat, veggies, and spices. The taste enough to conjure images of heavenly god rays, harp music, and drooling cherubs in the likeness of Guy Fieri. The owner Takano Ken admits he opened his shop specifically so he could eat Tonkotsu Shoyu Ramen (which is a perfect reason to start any business in our opinion). While he describes both the ramen and his style ramen sop, `Rare`, Takano-san is right on his way to paving the Ramen Road of Fame by making his signature dish the next Shiroishi mainstay. It certainly finds itself being the hotspot for many southern Miyagians.
Shiroishi is considered `rural` only when compared to a noisy and busy behemoth like Tokyo. Despite being a faction of the size, it makes up for size in the quality of what if offers travelers. The city of Shiroishi is like a microcosm of Japan, and satisfies everything a traveler could possibly want out of the sprawling, mountainous island. From fox covered mountains, to its anime inspired sword battles, Shiroishi is its own Japan in a sense. Being easily accessed by either Tokyo or Sendai, it is the best Japan Sampler Day Trip anyone could ever hope to have.